Yesterday we had a CDS Guild Meeting in the NFS Guild building.

Various projects were approved for building, Sudane will look after rebuilding two Colonia Nova builds, and my proposal to rebuild the Rathaus on the Platz in Neufreistadt was accepted by all.

I was finally made ‘Artisan’ having submitted my three builds last summer and ‘Artisan Master’ on the strength of creating the much admired new Thermae last year in April 2016.
Needless to say that I feel very proud!

Blogging about rebuilding  the Rathaus

I am planning to blog at each step of rebuilding the Rathaus for my own documentation of the various steps taken but also for Sylvia Northman, the new CDS Guild Apprentice who is keen to learn the art of building.

Rathaus – First Step: Back to the drawing board

These two pictures of the RL Rothenburg Rathaus will be used as a starting point for the first drawing of the CDS Rathaus. 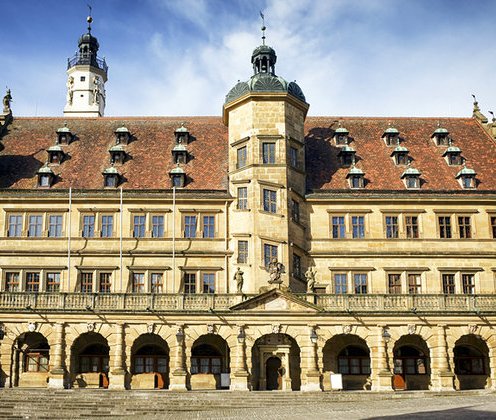 I took the measurements of the existing Rathaus building in CDS-Neufreistadt by placing beams for the length, width and height of the building.
Sudane asked me if I had space to work and I do since the Rathaus is not very big. The next image shows the white space that will be taken up by the building.

The image shows my avatar against the space available.
I am wondering if I should have 1 or 2 floors; two look much better for the overall proportions but then I don’t want to go over 80 Land Impact if possible.

Working out the spaces

Well, once I drew out the sketch there was no stopping me, I wanted to see how the spaces were working out for the columns, windows and also to see if having a ground floor and two floors was the right move. I took a photo of the work so far.

Creating the windows and stone surrounds